The feast of St. Andrew the Apostle is celebrated around the world on November 30th. 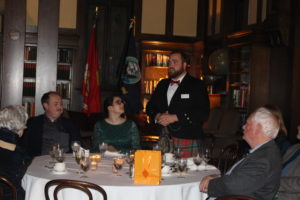 Each year, on or around November 30th, our Scottish St. Andrew Society hosts a beautiful dinner to honor the namesake of our society: Saint Andrew the Apostle.

Saint Andrew was a traveler, known for his socializing, evangelizing, and his hospiltality. These ideals of St. Andrew are embodied in the national identity of Scotland itself. Charity, hospitality, kindness and compassion – especially for travelers – are key tenets of Scottish culture. It stands to reason that he would be the namesake of Scottish cultural societies the world over.

Scots and Scots at heart come together to celebrate St. Andrew’s Day – Scotland’s national day. The significance of St. Andrew in Scotland is long and storied, with feasts being held in his honor as far back as 1000 AD. In 1320, with the signing of The Declaration of Arbroath, St. Andrew was officially recognized as Scotland’s patron saint. In the centuries since, St. Andrew and Scotland have become synonymous with each other – even the national flag is named in his honor.

Despite the fact that St. Andrew had stood as Scotland’s patron saint for so many years, it wasn’t until the 18th century that the popular celebration of “St. Andrew’s Day” became commonplace in Scotland. Surprisingly, the present-day tradition of celebrating on St. Andrew’s Day was not started in Scotland, but by a group of Scottish ex-pats! In 1729, a group of wealthy Scottish immigrants in South Carolina founded The St. Andrew Society of Charleston – ostensibly the very first St. Andrew Society – as a charitable organization to assist widows and orphans in the area. The highlight of their event calendar was their annual St. Andrew’s Day celebration.

This was followed by the founding of The St. Andrew Society of the State of New York in 1756 by Scotsmen who sought to relieve the poor and distressed in their community. Still in active operation, it is the oldest registered charity in New York.

From these simple beginnings and with simple intentions, St. Andrew Societies now exist in all corners of the world to serve local communities and celebrate Scottish culture.

To learn about our upcoming St. Andrew’s Day Dinner, click here – and scroll through the images below to see photos from previous events.