Saint Andrew and History of the Saltire 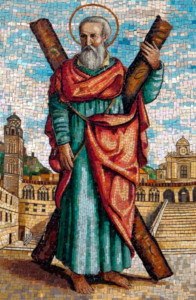 The feast of St. Andrew the Apostle is celebrated around the world on November 30th.

Saint Andrew was born in approximately 5 AD and was an apostle of Jesus. He evangelized around the area of the Black Sea and throughout what is now Greece and Turkey. Around 60 AD St. Andrew was martyred by crucifixion. History tells that when he was sentenced to death, he deemed himself unworthy to be crucified on the same type of cross that Jesus had been. He requested that his crucifixion be in the form of “crux decussata” which is the x-shaped cross – or saltire. Many depictions of the martyrdom of St. Andrew show him bound to an x-shaped cross.

About 700 years after the death of St. Andrew (in about 832 AD), a king named Angus II (Oengus II) led an army of Scots and Picts in battle against the Saxons - which took place near the modern-day village of Athelstaneford in East Lothian, Scotland. King Angus’ army was completely outnumbered and defeat was imminent.

History tells that King Angus prayed for victory in battle, and saw the formation of the St. Andrew’s cross - the “saltire" - in the white clouds against a clear blue sky. He vowed that if they won the battle, he would honor St. Andrew as the patron of Scotland. (Other accounts say that St. Andrew came to King Angus in a dream the night before the battle and told him to watch for "the sign of the Cross of Christ in the air" as an assurance of victory.) Whichever version you favor, King Angus II and his army defeated the Saxons and the Saltire became a symbol of Scotland forever more.

St. Andrew’s feast day has been celebrated in Scotland as far back as the year 1000 AD. However, it wasn’t until 1320, when Scotland’s independence was declared with the signing of The Declaration of Arbroath, that St. Andrew officially became Scotland’s patron saint.

We know that St. Andrew is the patron saint of Scotland - but he is also the patron of Ukraine, Russia, Sicily, Greece, Romania, the Philippines, Amalfi, Malta, and the former Prussia. He is also a patron saint for many professions, including the Army Rangers, mariners, fishermen, fishmongers, rope-makers, singers, golfers, and performers.